Here are a few of our past and completed projects.  For our current efforts and collaborative projects please visit those sections of our website.

Picture by C. Garcia ©
Carlos E. Garcia, our visiting scholar from UNSL Argentina, is primarily heading this effort with the supervision of Mr. Malladi. The goal here is to characterize an acoustic field by way of a single sensor. This would alleviate the need for sensor arrays in order to achieve the same goal. Like any technique, it will have its advantages and disadvantages and we hope to thoroughly investigate these.

Picture by Sriram Malladi ©
This project, headed by Mr. Sriram Malladi, investigates the use of Seebeck voltage in a thermocouple junction made of SMA and constantan in order to obtain the SMA state. Seeback voltage is related to temperature, and temperature of an SMA yields information about its condition. At this stage, preliminary work has been done and we hope to extend this work further on. A picture of our prototype SMA-constantan thermocouple can be seen on the left.

The concept of traveling waves is explored in order to generate propulsion of small vehicle-like structures. This program will investigate the combination of modes in order to induce traveling waves as the fundamental mechanism to generate movement. The traveling waves of the structure will be generated with the use of smart materials such as piezoceramics. This project forms part of a senior design project and is headed by Bryan Joyce. The senior design members are: Jacob Aber, Nick Meligari, Edan Fletcher and Jordan Mullins. 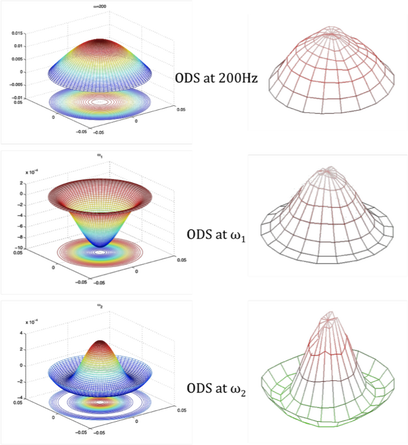 ODS and modes of a membrane-cavity coupled system. Theory and Exp.
Optical membranes are currently pursued for their ability to replace the conventional rigid mirrors that are used in space-based telescopes. Among some of the many benefits of using optical membranes, is their ability to considerably reduce the weight of the structure. Given the low density of these thin-film membranes, the lower-end dynamics play a more significant role than in their rigid plate-like counterparts. Space-based mirrors are subjected to a series of disturbances. Among those encountered are thermal radiation, debris impact, and slewing maneuvers. Thus, being able to model the dynamics appropriately is essential for the adequate performance of thin-film membrane mirrors.

With this in mind, the work studied used an impedance based modeling approach to describe the coupled dynamics of a pressurized optical membrane mirror with the end goal of performing vibration suppression of a membrane through acoustic excitation. First, the effects of mass loading due to air surrounding a membrane and energy loss due to sound radiation to the far field were modeled in the case of a single membrane. These results are compared to the case of a membrane in vacuum. Second, the membrane is then coupled to a cylindrical cavity where the modeling takes into account the structural acoustic coupling between a cylindrical membrane and a rigid cylindrical cavity, similar to a drum. The coupled model also takes into account the energy loss by sound radiation to the far field due to the membrane's vibration. Thirdly, a positive position feedback controller for vibration suppression of the membrane was implemented. This was done using a centralized acoustic source at the base of the cavity as the method of actuation. The acoustic actuation is of great interest since it does not mass load the membrane in the conventional way, as most methods of actuation would.

Model updating with a closed form solution and preserved connectivity

The work herein developed the quadratic compression method (QCM) for model updating. The modelling error was defined in the parametric set-up, i.e. with pre-specified principal submatrices multiplied by unknown scalar parameters. The optimal parameters are obtained by minimising the error in a squared down version of the eigenvalue equation, thus with reduced computation. The method is shown to belong to the class of Minimisation of the Error in the Characteristic Equation, with a particular choice of the weighting matrix. Analysis of the propagation of the noise into the identified parameters reveals that QCM has desirable noise filtering properties. The work also presented a weighted version of the method, called WQCM, which is motivated by further reducing the effect of measurement noise. In addition to the theoretical analysis, the superior robustness to noise properties of QCM and WQCM are demonstrated by simulations and experimentally. The work was later extended to include the mass matrix in the updating process

We had a little fun with some Shape Memory Alloy (SMA) wires and made a few samples of the letters "VT" shaped out of a SMA wire. Watch it in action below. We would like to thank our VAST Lab members Carlos Garcia Castro and Sriram Malladi for designing, building, and shape setting the VT SMA.